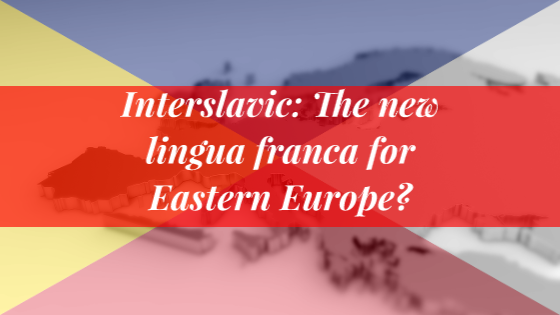 Have you ever seen The Painted Bird? It’s a World War II drama based on the eponymous 1965 novel. Apart from its historical and artistic aspects, The Painted Bird is a very interesting movie from a linguistic point of view. It was the first movie that featured Interslavic, or Medžuslovjansky, a language designed to be understood across all Slavic-speaking countries.

The Painted Bird is a WWII drama that tells a story of a young boy stranded among cruel and bigoted strangers in an unnamed Eastern European country. Its author, Jerzy Kosiński, carefully avoided implicating any specific nationality. For the movie director to follow the same path, there was only one solution available–to use a transnational Slavic language. Luckily for him, there was one: Interslavic (Medžuslovjansky).

This language has been being developed for over a decade by a Czech professor of computer science, Vojtech Merunka, and a Dutch linguist, Jan van Steenbergen. The first version—then called Slovianski—was introduced in 2006. Interslavic is based around one rule: finding the largest common denominator in a dozen Slavic languages in

First attempts started in 2006 when the first version (at this time called Slovianski) was introduced. Medžuslovjansky is based around one rule–finding the largest common denominator of about a dozen Slavonic languages in grammar, spelling, syntax and vocabulary. Interslavic chooses words that Slavic readers will most likely understand and is intended to be a helpful tool for all Slavic speakers, especially tourists, business people and immigrants.

According to Wikipedia,* one of the advantages of Interslavic is that it can be typed on any Slavic keyboard. The border between Latin and Cyrillic runs through the middle of Slavic territory, and therefore both alphabets (Latin and Cyrillic) can be used. Because of the differences between, for example, the Polish alphabet and other Latin alphabets, as well as between Serbian/Macedonian Cyrillic and other variations of Cyrillic, Interslavic has no official orthography. Instead, it uses a prototype orthography, which means that many phonemes can be written and pronounced in various ways. For example, the distinction between hard and soft consonants (t vs. ť, r vs. ŕ, etc.), typical in the West and East Slavic languages, is optional both in speaking and in writing. Because Interslavic is not an ethnic language, there are no strict rules regarding accentuation, either.

As an example, let’s take the word “house,” which is “dom” in Interslavic. This is the form chosen from different Slavic languages:

Interslavic has three grammatical genders: masculine, feminine and neutral. It is characterized by full declension and full conjugation of verbs. It is a simplified language, so it uses simple, unambiguous endings and, in general, avoids irregularities.

Words in Interslavic are formed and based on comparison of words in Slavic languages, which are divided into six groups:

These groups are treated equally. To enter the Interslavic dictionary, a word should be understood by users of a maximum number of the groups mentioned above. The correct form is determined on the basis of not only the frequency of a given word in modern Slavic languages but also regular derivation from Slavonic, to ensure internal cohesion.

Now for the big question: Does this project work? The short answer ought to be YES. Take a look at the comments below this video:

There are over 1,000 of them, and most of the commenters confirm that they did indeed understand most of the Interslavic text presented in the clip. Native Serbs, Russians, Ukrainians, Czechs, Poles and Macedonians wrote that they understood everything—or at least about 80 percent of the text. One commenter from Macedonia wrote that he understood the text, but found the pronunciation weird because of the undertones. Some commenters from Poland said that this language sounded like Czech to them.

But the vast majority agree that this language should definitely be more common across Slavic-speaking countries, and that gives hope that someday it will be.

We, at Aploq, like the idea very much and give it our thumbs up!