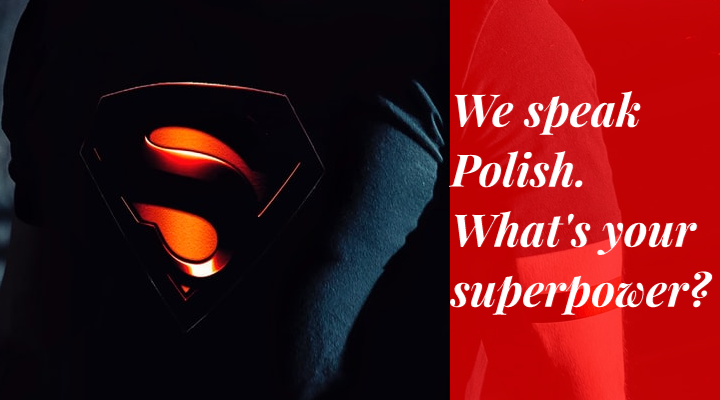 Speaking Polish is a kind of a superpower. How so? Polish is one of the most complicated languages to learn for native English speakers, and with good reason. For starters, we have seven cases in the Polish language. Also, it’s loaded with consonants, and there are far more exceptions than rules. And that’s not all!

First things first: Polish is spoken by about 45 million people worldwide and is part of the Western branch of Slavic languages that belongs to the large Indo-European language family. There are some similarities between Polish and other Slavic languages While we’re on this subject, we encourage you to check out this blog post about Interslavic. According to some, about 60 per cent of Polish vocabulary is similar or identical to other Slavic languages. But these differences can be deceptive!

So, rule number one: don’t ever try to replace Polish words with words from other Slavic languages. Czech, Slovak, Russian and Ukrainian are different languages, in the same way that French and Italian are, although they do have a lot in common.

Polish: one of the hardest languages to learn

According to Insider.com[1], Polish is one of the hardest languages to learn for native English speakers. Polish is in category IV, which means that an English speaker can expect to sacrifice at least 44 weeks (or 1,100 hours) of study to reach the level of General Proficiency in Speaking (S3) and Reading (R3).

This research is based on data from the Foreign Service Institute (FSI), the United States federal government’s training institute for employees of the U.S. foreign affairs community, which prepares American diplomats and other professionals to advance U.S. foreign affairs and interests overseas[2]. According to FSI, Polish is a ‘hard language’ with ‘significant linguistic and/or cultural differences from English’.

However, in the FSI scale, Polish is by no means the hardest language to learn for native English speakers. The most difficult of all is Japanese – the only language in category V*. Other ‘super-hard’ languages include:

According to another source, provided by Babbel Magazine[3], however, Polish is the third hardest language to learn, just behind Mandarin and Arabic. And the reason that it’s not placed higher on the list is because it uses the Latin alphabet (for which we’re very grateful!).

Why is Polish so hard to learn?

Truth be told, even Poles struggle with Polish! The vast majority of us make errors in writing and speaking – and that can be true of translators, as well. That’s why, at Aploq, we make sure that every translation project undergoes a thorough proofreading by a Polish-language specialist. In fact, we have an in-house team of Polish linguists who spent their university years mastering Polish grammar and since then have earned their bread in publishing houses polishing up Polish texts. You may find it interesting to know that hiring good Polish linguists is one of our main HR challenges. We feel lucky if three in 100 candidates pass our strict grammar and punctuation test.

As you can read on Babbel’s website, spelling and grammar are a couple of areas in which Polish can give English speakers a hard time. Words are loaded with consonants, which makes them difficult to spell and pronounce – even for us native speakers!

There are no articles, but Polish, like Latin, is an inflectional language that distinguishes seven cases, defining the noun usage in a sentence. This feature makes our mother tongue challenging to master, and causes a lot of trouble for foreigners.

What do foreigners say?

Foreigners learning Polish also indicate that, at first, many Polish words sound the same. One of the most challenging aspects of learning Polish is differentiating between ‘ś’ and ‘sz’. Grammar is not much better, either.

As you can read on the OneHourTranslation blog,[4] in English, you can say ‘on the box’ or ‘under the box’ or ‘in the box’ and the word box stays the same. In Polish, as in other Slavic languages, the word for box changes depending on the way it’s used. Additionally, you have to worry about modifiers and gender, which change the words further. Word order is also usually different, with the organization of thought almost reversed from English, so that the stuff you put at the beginning of an English sentence usually ends up at the end of a Polish sentence, and vice versa.

All in all, as the author of this blog summarizes, Polish is an incredibly complicated and frustrating language to learn. That’s why, if you need Polish translation services, you should go for a native speaker. And that’s where we can help. Give us a call or drop us a line and let’s talk about your Polish challenges!