The uniformity of the Polish language

The uniformity of the Polish language 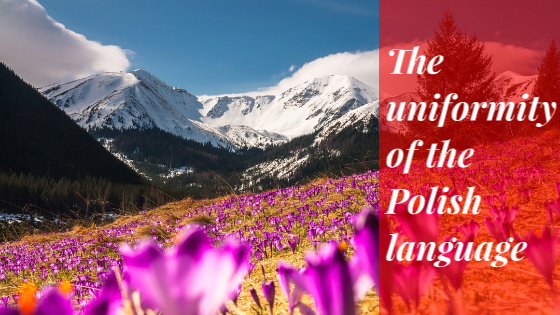 Polish being our primary working environment, we’ve decided to write a bit more about our native tongue. After all, without a shadow of a doubt, this is an immensely absorbing issue! We work with Polish every day, we use it all the time, but we rarely have time to think about it. We want to change that, and that’s why, in this and subsequent articles, we’ll be discussing some interesting characteristics of the Polish language. Let’s begin with its uniformity.

Compared to other languages, Polish is extremely homogeneous. There’s only one Polish language, commonly understood throughout Poland. The language used by people in Gdansk, Warsaw and Cracow is more or less identical. And this is interesting, as such linguistic homogeneity is rare. Consider a couple of examples:

There is no single version English. To start with, we can identify at least four different English versions:
• British
• American
• Canadian
• Australian

There are lots of differences between them – and not just in terms of pronunciation but with regard to spelling and vocabulary, as well. Let’s look at a couple of examples. Take the metal box that contains the gears in a car. British speakers would call this a ‘gearbox’, while Americans would call it a ‘transmission’. Two completely different words! When talking about the piece of clothing that covers the lower part of the body – ‘trousers’ to Brits – Americans would say ‘pants’, while Australian would call them ‘strides’.

At this stage, you might be thinking, Well, that’s because English is used worldwide; it’s no wonder that people in the United States and Australia talk a bit differently. But when you look more closely, you’ll discover that English is even more diverse than that. A person from Philadelphia speaks differently to someone from Salt Lake City. A Londoner will spot a person from Edinburgh after a brief ‘Hello’, while someone from Manhattan will detect a Harlem accent even faster. This isn’t the case in Poland: you can spend a day with a person and not be able to tell which part of the country they come from.

But let’s not focus solely on English, because the same applies to less spoken and popular languages.

Norwegian has only about 5 million speakers (while Polish has approximately 45 million), yet it’s divided into two official forms of written language: Bokmal (used by about 90% of Norwegians) and Nyorsk. But the story doesn’t end there: Norwegian has four additional dialects: Nordnorsk, Trøndersk, Østlandsk, and Vestlandsk. When speaking, most Norwegians use a local dialect, which is more or less the same as one of the two written language forms.

You might argue that Polish also has dialects, and this is true. However, none of these dialects is considered a separate language and none of them is used broadly throughout Poland. There are some regions, particularly in small towns and villages, where you might hear a specific dialect, but you can still use ‘standard’ Polish to communicate, and you’ll be understood. Furthermore, with a few exceptions, none of these dialects is used in official communication (in schools, churches and bureaucratic departments, for example).

Let’s take a closer look at these dialects. There are five primary ones: 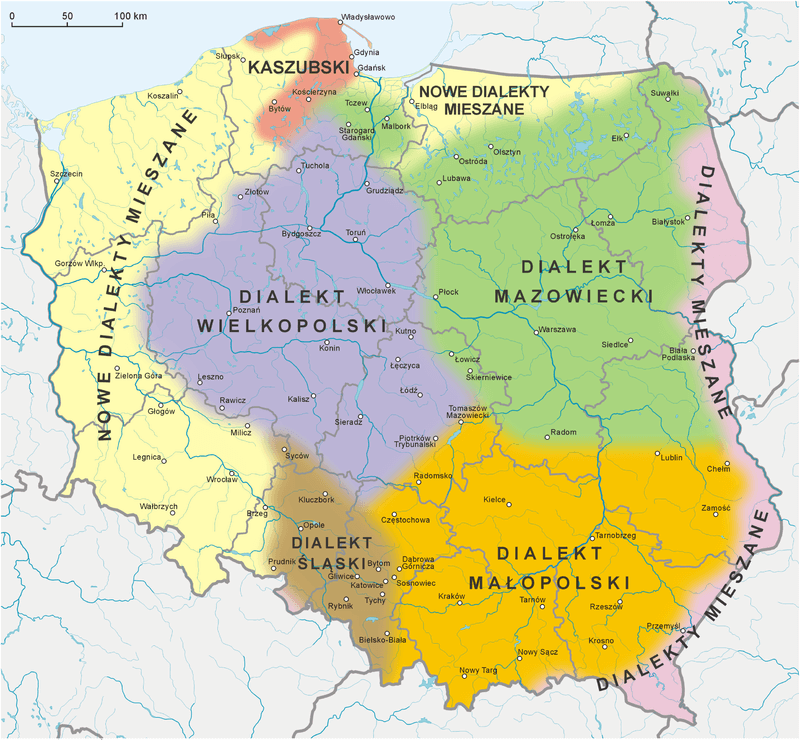 Aotearoa – own work The ranges of Polish dialects according to S. Urbańczyk (modified), based on the “Polish dialects. Multimedia Guide” edited by H. Karaś

Used mainly in Upper and Lower Silesia, Silesian is the mother dialect for around 530,000 people. Noticeable groups of Silesian users can also be found in the Czech Republic, Germany and even in the United States. Its users can be found in cities such as Opole, Bytom, Katowice, Tychy and Bielsko-Biała.

This dialect is spoken by the inhabitants of Lesser Poland and varies throughout the region. The boundaries of the Lesser Polish dialect cover approximately the area of ​​southeast and central Poland, from the middle courses of the Pilica and Wieprz Rivers down to the Carpathian Mountains.

The Masovian dialect covers the northeast and central part of Poland and is the most distinct of Polish dialects and also the most expansive. However, it is now rarely used.

Currently, this dialect covers an area similar to the Greater Poland voivodeship. Like the Masovian dialect, it is rarely used.

As you can see, although in theory there are five different dialects, these are spoken by less than 10% of the Polish population, and only two of them remain in active use. That’s why we can claim that Polish is a homogeneous language. And this uniformity is beneficial, especially in translation work. By translating into Polish you equally reach all Polish speakers in every part of the country and worldwide too.

As a translation agency, we don’t have to worry about whether our translations will be understood in various parts of Poland; we don’t have to adjust it to the specific region’s needs. The dialects mentioned above don’t function in business language and official communication; we can rely on ‘standard’ Polish.

This doesn’t mean, however, that our work is easy! After all, Polish is one of the most complicated languages to learn! We will examine this issue in the next article.