The role of translators and interpreters during a conflict 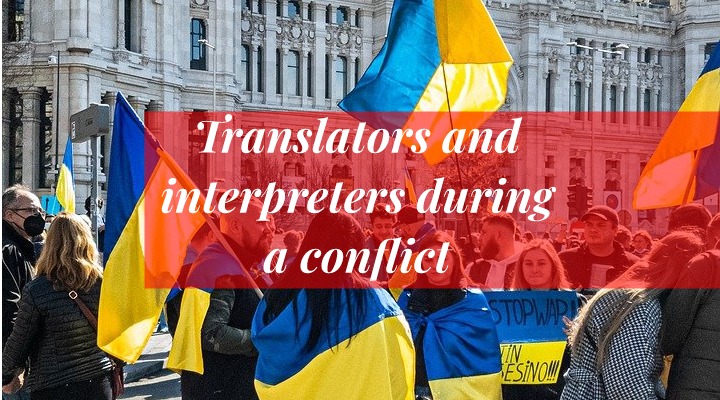 The Russian aggression on Ukraine that started in late February 2022 has dramatically changed the situation in almost all of Europe. And although we all feel that what happens behind the Eastern border is horrible, it raises the question about the role that translators and interpreters play in conflict resolution. And that’s what we would like to discuss today.

Of course, one could say that translators and interpreters are responsible for the exact same thing – translating and interpreting. And that’s true. However, when a conflict between two or more countries arises, the circumstances drastically change, and not every translator is prepared to work in such life-threatening situations. Let’s talk a bit more about this issue.

The role of an interpreter

Interpreters deal exclusively with oral translation. The most popular forms of interpreting are simultaneous and consecutive. Let’s take a closer look at them:

Of course, both forms of interpreting have to be done while paying attention to a dialect, idioms, acronyms, and specific terminology. Moreover, interpreters frequently have to take the speaker’s emotions into account. The message that’s being delivered has to be precise and without any bias. After all, it can directly affect the outcome of the meeting, which can have dramatic results in war circumstances.

The role of a translator

From many perspectives, translators, who work with written texts only, have a slightly easier job to do. They can think about how to convey a specific message and do some checks when they are not sure of the best translation. This doesn’t mean, though, that they can take as much time as they need or want. Translators are responsible for translating messages, documents and statements for both sides of the conflict, and here, time is of the essence, so although they have more time than interpreters, they still have to act quickly.

And speaking of acting quickly, what does translating and interpreting look like in a war zone?

Translating and interpreting in a war zone

The truth is, any negotiations across different languages and cultures could not be possible without translators and interpreters. Their role is essential, but it also entails many risks.

For starters, it’s difficult to imagine a more challenging and difficult workspace. There is a constant danger that a translator or interpreter could be hurt or even killed. And unfortunately, there’s almost nothing one can do to mitigate this risk. But that’s just the beginning.

How can a translator or interpreter prepare to help both sides communicate? Here, preparation plays a crucial role. Translators or interpreters working in such circumstances have to know all the important:

Needless to say, the poor quality of translation or interpreting can result in a diplomatic mishap, which could lead to the escalation of the conflict. Therefore, a professional translator will take some time to study all the source materials, e.g., maps and other documents to understand different aspects of the conflict. They have to know which places are currently under attack, what the demands are of both sides, and who’s responsible for making decisions. This way, they will be able to communicate all the vital information and messages correctly. This is particularly important because war creates many chaotic situations, and military people don’t always talk understandably and coherently. Here, the role of a translator/interpreter is also to construct a sense of each statement, and that’s not always easy.

Of course, typical requirements such as a strong background in both languages are still applicable. The knowledge of the terminology used is also of paramount importance. In addition, we need to mention the importance of personal qualities such as self-control, practicality and responsibility.

Without a doubt, wartime interpreters and translators have a challenging and difficult job. Sometimes, they are even deemed heroic for their contribution to the resolution of a conflict. They are forced to live in hiding in other situations, especially when they come from a local community.

Lastly, we want to mention one more aspect of this issue – neutrality. Many practitioners believe that full neutrality is an unattainable or unrealistic expectation when it comes to wartime translators and interpreters. That’s because it’s difficult for many of them to be totally detached from the conflict and its possible outcomes. This raises many concerns, and the interpreter’s neutrality may be questioned by one of the sides of the conflict.

As you can see, the role of a translator or an interpreter in conflict resolution is multi-faceted and complex. There are many questions and doubts and no easy answers to them. One thing is certain – interpreters enter conflict zones and peace talks as catalysts to achieve understanding between two or more sides of the conflict. And they should do their job as well as possible, as they are indispensable to any effort toward the conflict’s resolution.