Game localization for the Polish market

Game localization for the Polish market 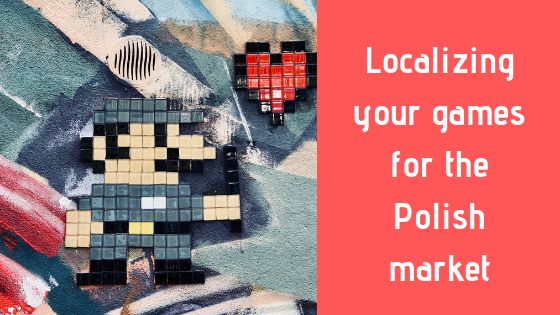 Are you from an LSP? A gaming company? Or simply a gaming enthusiast? To be honest, it doesn’t really matter! Gaming is a pretty exciting subject when it comes to localization, especially when you take a look at it from the perspective of a whole nation. Which is why we’d like to do our take on gaming localization for the Polish-speaking market.

If you take a look at Poland statistically from a gaming point of view, right now there are around 7.1 million gamers.  Revenue-wise, this amounts to 361 million USD a year, and that’s growing year on year by 9.8%. Surprisingly, though, the market’s largest segment is mobile gaming which has a market volume of 139 million USD (for 2019).

A bit of background…

Just like any other market, user experience plays a major part in a game’s success, and this starts long before the game localization process begins. First of all, a game developer has to choose the right console. PC exclusive games are usually more labour intensive like World of Warcraft, or for beta testing something extremely different (e.g. Minecraft or Kerbal Space Program). Apps are nice and small, Nintendo tends to be quite a restrictive console to develop for, so the mainstream market you’re looking at Xbox or Playstation.

Another question game developers have to tackle is how are they going to make money off their game? Is it going to be freemium, a monthly subscription, or a one-off payment? This highly depends on your game’s content and should be picked before development has even started.

There are a number of other factors that impact how well your game performs financially. Contrary to popular belief, graphics don’t actually have to be the be-all and end-all. The most important thing is to keep graphics consistent and help the player feel totally immersed in the world you’re building.

Next, let’s talk about the storyline as this is how compelled you are to complete the game. Alice Madness Returns for PS3 did an amazing job at creating an ever-changing environment as the universe, which gradually changed as Alice moves thought her own corrupted mind, becomes ever-more corrupted. Other great examples of simple graphics building an excellent world are Trover Saves The Universe, Minecraft, and Pokemon Go.

Game mechanics is how well the game plays overall. For example, in the original Doom, the designers never set a character height so you could shoot any height above the character you were trying to hit at and still hit them, even if you blatantly missed! Other examples would be for shoot ‘em ups such as BulletStorm or BioShock where the players get a well thought out controller layout which enables them quick easy access to a wide variety of explosive guns, mutant powers, etc. to enhance their gameplay without slowing down combat.

Is there anything in the story that makes the game worth playing again? Is there anything else you need to do once you’ve completed the main mission? Thanks to the internet these days and multiplayer games, most games have endless replayability such as racing games like Need For Speed.

Last but not least, the more creativity you can spread throughout your game, the better the overall response. The more creative and more unexpected your plot, storyline, and missions are the better – because let’s face it, you don’t want to be as repetitive as World Of Warcraft! In short, you don’t want to give your customers the same thing they’ve had over and over again.

Moving on to game localization

Now that we’ve covered everything that goes on before game localization begins, let’s get into the nitty-gritty of what we, as an LSP have to do. Now, game localization may sound like a one-size-fits-all kind of job, but that couldn’t be further from the truth. So, before we get to work, we always like to find out what type of game we’re localizing. Because of the sheer number of variations we’ve gone over above, we need to make sure we choose the right localizer who has experience dealing with the game specifics.

Next, we need to take a look into style guides and terminology. Every game has its own specific style and terminology that needs to be used – and that’s even more so when it comes to sequels. For games with lots of text, we have to make sure that a QA structure is in place so that everything can be sufficiently proofread. As we mentioned before, for a game to be successful the players need to feel like they’ve become a part of that world – which is where words come into play.

Now…what about game localization for Poland?

Polish games love their games, which is why it’s so vital to localize properly so they can enjoy the full gaming experience. Plus, with over 50 million speakers worldwide, it’s a great language for game developers to use to make sure their games reach a truly worldwide audience!

One of the main issues with Polish is the length. Polish words are longer, which causes a lot of problems as space is very limited when it comes to game text. Plus, it often takes more words to describe something than in English. This has meant that lots of games aren’t properly localized, damaging the game’s reputation. Sandbox games are actually well-known for their localization, as the grammar in them tends to be famously bad.

Another big issue is that Polish is such a descriptive language. One word in English may have several Polish equivalents which all have slightly different meanings. It’s these differences which can really add to the atmosphere of the game but cause game localizers a lot of issues at the same time if they don’t have reference materials to go by.

“It’s cool how Polish translators handle creating new words for games. But what’s not cool is that Polish is a flexed language where verbs and nouns have many different forms. It often means that the translators cannot find the right form when they don’t have the full content of the game. This means that we end up with endless corrections. Many additional issues arise when the developers of a marketing agency do not consult translators from the very beginning.”

So, if you’d like to find out more about game localization or Polish up your games – we’re here for you.